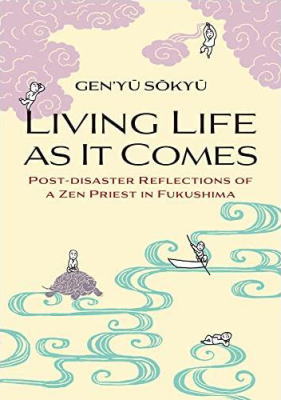 It was the 2011 Tohoku earthquake and tsunami, which had a particularly profound impact on my home prefecture of Fukushima, that made me painfully aware of the need to live life as it comes, without fixed goals, which tend to be imperfect and grounded in desire.

This book consists of a selection of short essays penned by GEN’YU Sokyu, chief priest at a Zen temple in Fukushima Prefecture. Beginning in April 2012, he began writing a newspaper column that ran for seven and a half years. Embracing the ever-changing nature of the world, he took up a wide range of topics inspired by his daily activities and experiences, including events in post-disaster Fukushima, temple renovation and soil improvement, Japanese customs, observations about nature, and encounters with people from all walks of life. With a mindfulness sometimes accompanied by a wry sense of humor, he reflects upon the surprises those events and encounters brought and what they taught him. His insightful essays are sprinkled with wisdom on how we should cope with life and death, derived from Buddhist and Taoist teachings. He encourages each of us to follow our mind as it changes according to the circumstances of the moment; the result will be experiences far more valuable than the simple achievement of our initial plans.